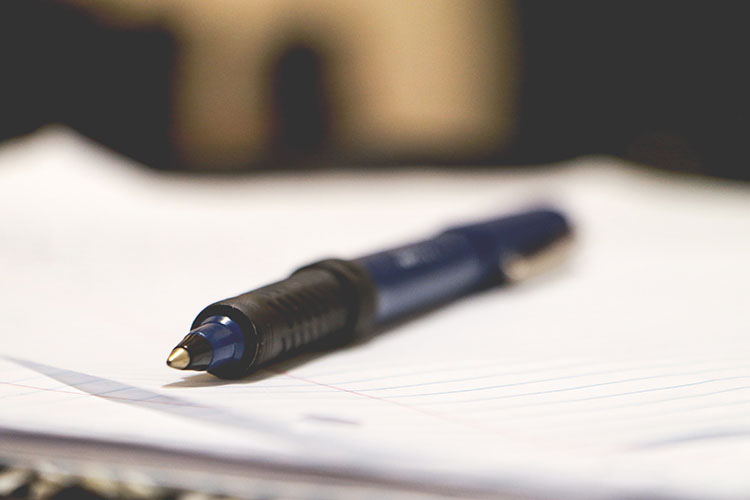 Mrs Johnson’s Year 9 English class have been looking at symbolism and how it can be used in descriptive writing. Each student chose an object – real or imagined – and wrote a piece in which that object becomes a symbol for something else less tangible. Here are a few brilliant examples.

The pen sat idle, collecting dust as hundreds of people each day came within breathing distance. If the pen were lucky it would glide along the page for brief seconds, quite like an ice skater doing a quick waltz jump. The pen’s living conditions were that of an ant colony, cramped and clustered in its pot that it called home.

The pen was a beautiful oceanic blue; it told a thousand stories with the different light scratches it had on its surface. You can only tell this when it’s sunny as the scratches reflected. It was not a big pen yet not small; perfect size for many of its brief owners. Sometimes it was a bit too big and a bit small, as everyone who came to the medical clinic was different.

The pen was used as much as we went outside during lockdown. Very rarely did it go out just to do 10 seconds of writing each week, it was as if it was my mum going to the shops every so often. However, the main difference about us is that the pen’s lockdown was until his ink runs out (dies) so really it’s like it’s living in a jail whilst being innocent at the same time. With a bit of labour every so often; not the best life would you agree? However for the pen not being used is a good thing as he is less likely to run out of ink. So by not being a quirky pen he has been around a long time; he was just a simple oceanic average sized clicker pen. Many would say he is a forgotten favourite but he always gives a reliable performance on any piece of paper he danced upon.

The pen sat idle collecting dust waiting to dance on the white paper.

The tea cup was shattered. Lying now, still, on the grey kitchen tiles. Encircled by flecks of ceramics the larger pieces stared up at him with a heart-wrenching solemnity. He stared back in silence.

He crouched down and his fingertips traced the fragments, before lifting it up into his trembling hands, caressing it like a lover’s face. His chest ached to see the broken cup, a rugged lump filling his throat as the image began to swim in the vision of his flooded eyes.

It was warm. The sun’s light drifted, golden in the room. He had been handed a small parcel, attentively wrapped in such a way that the contents of it were obvious. It had been given to him with a humble loving smile and as he opened it, it was received with just as such, grins and laughter of pure happiness. He took the time to study it properly. It was simple in design; a small stylised love heart complete with cheesy lettering, against a simple white background. It seemed cheap in money, but from the moment he lay eyes on it the object became priceless to him, by what it meant and who it was from. He looked back to the giver and promised he would treasure it forever.

He let the fragment fall from his fingers as they went limp, as with a clatter it broke in two, splitting the image and the lettering down the middle. He trudged towards the kitchen window and rested his elbows on the windowsill. He was left staring absent-mindedly into the monochromatic landscape before him. Sideways rain fell from sorrowful grey clouds, painting the window with blotches of clear paint like tears. The garden looked dead; a swing set remained frozen and unused, a wooden bench rotted slowly, and once beautiful roses now wilted, craning their necks down to face the dead ground. It was all grey, and uncomfortably silent.

There had been nothing but sound just minutes before. The argument had started, voices had been raised, the cup had smashed when he struck it, and then he had watched as the door had been slammed. And then silence.

The second the thunder roared the rain began to fall. It was extremely sudden, and they hadn’t expected it. A warm hand found his and dragged him as they began to run through the rain, shielding their faces in vain and laughing together. By the time the two got back they were soaking wet, but they didn’t care. They entered through the backdoor into the kitchen and warmed themselves up with hot drinks, which he drank from the cup the other had gifted him. They talked for hours, despite themselves, wrapped in a blanket as he held the cup with the heart and the lettering close to him.

He turned away from the window to look back at the desolate, cold kitchen. His gaze turned down to the fragment he had dropped and shattered.

Underneath the small heart, the word ‘forever’ had been printed onto the cup, and he had always believed it.

But now, the cup was broken.

It was time to clean the attic and get rid of all the unnecessary things. Opening the stairs to memory lane, the deep-rooted, wooden door creaks, as loud as the crickets at night. Walking up slowly, with each piercing step, going up and up, to a whole new world. Boxes calling my name telling me to open them one by one. However, it’s a battle to get through this, because the dust is a monster wanting to attack a huge cloud, each time I step a foot near a box. Although it’s a struggle to get to the ancient, old memories, there’s a giant, oak desk sitting in the back, hiding from society. It was untouched for years, the hard wood looking up at me pulling me in to open the handle. As I open it, a shiny object glistens in my eye, something so beautiful pops up, it reminds me of something so special but I can’t remember what. I take it out holding it, there’s two, both with an identical design, embroidered on it, shining so bright when the sun hits it.

These earrings were no ordinary earrings, they’re antique but little, shiny diamonds bordered a big, white as snow pearl, with small as raindrops silver balls in between every few diamonds. On the back, engraved was my great-grandmother’s name and the date she got them. They were very special to her, having gone through as much as she did. My great-grandmother was the first owner of these earrings and now I will follow her footsteps into doing good just like she did. I will tell my children about her and what she did to help many people around her. When my great-grandma was young, she was hit with war, that took a huge turn on her life. She was only in her early 20s and was told to give up her dream job to help the injured in WW2. Although it was a huge chapter in her life, she agreed to do it within a second. Her name was Eleanor and was known for being one of the bravest women during that time. She helped the wounded, fought for rights and justice and was still able to come back to her dream job.

During all that, those were the same earrings she wore and gave to me. They were so special, like a gift given by an angel, so delicate and fragile, yet stunning and gorgeous. Those earrings have seen so much more then I could imagine, the horror of those who were injured, bombed and more, but they could see the goodness happening, people fighting for rights and justice, my great-grandmother helping the wounded and her accomplishing her dreams. Just looking at them, opened a door to my memories, knowing she died doing good for others and for her, I know she is a great woman, who changed lives and opened up new, better paths for people. Wearing these brings me closer and closer to her every day and I shall continue to wear them, opening up a new chapter for them to see, to tell generations on and on.